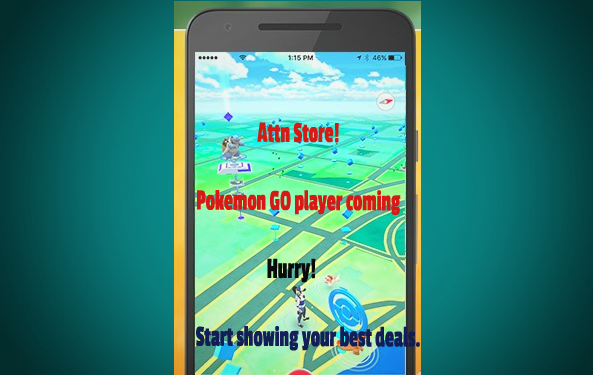 The world of gaming has not been the same since July 6, the day Pokémon GO was launched.

Within days of its launch, it started setting new records. Here’s one  – within a week of its US launch, it had over 65 million registered users.

Besides gamers, marketers, advertisers, and data analysts are delighted with Pokémon GO, for it has opened up new possibilities for them. AR has suddenly gone mainstream with Pokémon GO.

The next frontier in mobile marketing?

Does Pokémon GO herald the start of the “next big thing” in marketing?

Maybe too early, but the opportunities offered by AR games like Pokémon GO are too good to be passed up.

Pokémon GO players are found to be spending more time in the app than they do with some of the other popular social apps such as Instagram or messaging services WhatsApp and Snapchat.

The game has opened up a new channel in digital marketing for retailers. Pokémon GO makes smartphone owners use their GPS data to converge on outdoor locations earmarked, “Gyms” and “PokéStops” in their quest for Pokémon – all of which is sweet music to a retail marketer’s ears.

Retailers, small and big, see these stops as bait for potential customers. The way the AR game’s been designed, the first two steps in the inbound marketing process – attract and convert – are easily taken care of.

Then there’s “Lure”. Something that a player can buy to increase the number of critters in the game. Players have to physically hunt down these critters to go up a level in the app. Lures remain around for half an hour, and a very small investment by the store can buy enough lures to keep people coming to the store for four hours!

The L’inizio Pizza Bar in Long Island City reported a 75% spike in its sales over one weekend when it activated this module to attract virtual Pokemon characters to the fast-food place. Another tea store in San Francisco used the game to offer a “buy one cup, get the 2nd free” scheme for players.

Don’t dismiss Pokémon GO as “just another game”. This new kid on the block may yet challenge Web companies that specialize in eyeballs for businesses and may end up playing a role in major brands’ marketing.

Small and medium retailers are more likely to turn to this game to re-direct some of their limited marketing spend to boost business. With Pokémon GO, at least brick-and-mortar shops may give the “traditional” digital marketing channels a go-by and move on to AR games.

Yet another thing that works in their favor is the player profile of Pokémon GO. The community is not limited to geeks or hardcore gamers. This group shows audiences of many different interest-based communities  – millennials, sports fans, Pokemon junkies from the 80s and 90s. Some firms have even reported a fairly even gender split.

While marketers are at their drawing boards planning their strategies around Pokémon GO, advertisers, too, are strategizing.

Pokémon GO presents advertisers with a money-making possibility – which is to charge retailers fees to come on board as “sponsored locations”. Fast-food restaurants, coffee shops, and burger joints can turn into sponsored locations where people are gently encouraged to go to pick up virtual loot

When launched, there were reports of the game coming to McDonald’s. Some Redditors had revealed a McDonald’s logo hidden in the app data of the game. The image, they insisted, was proof that Pokémon GO was planning a partnership with the fast-food chain to drive traffic to its 35,000 plus outlets globally. These rumors were proven true when McDonald’s issued a statement later in the month, saying it would collaborate with the makers of Pokemon GO in Japan, making it the first corporation to do so.